Consider the phrase, “social media.” The “media” part refers to the content, the social content – the conversation.

Sales is conversation with a purpose.

I recently had the pleasure of spending some time with Matthew Shadbolt of The Corcoran Group after coaxing him to Baltimore to speak at SMC SalesCamp. Those of you that know, or know of, Matthew will know that he’s an amazing smart guy. He’s a talented marketer and the voice of The Corcoran Group’s social media efforts online.

With so much to learn from Matthew, I was eager to chat with him for as long as his patience could withstand. And being the true gentlemen that Matthew is, he graciously accommodated me. 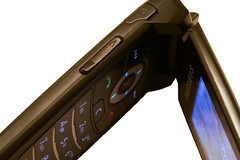 I learned a lot about how he sees the role of social media in the buying process. This means I got to ask him about some of Corcoran’s salespeople. The story that I remember most is his description of one of the agency’s most popular salespeople. She’s wildly successful (hundreds of millions in dollar volume each year), and is regularly seen holding 2 cell phones at a time, one up to each ear… negotiating. Hard core, no?

You see, this agent doesn’t use social media, or the Internet (at least not directly). As I asked more about how this agent conducts business, I learned that she’s very active with international investments and buyers. She’s been in Manhattan real estate for decades, and everyone in Manhattan real estate knows who she is. She networks. She gets deals done. And she has a reputation that precedes her.

I’m a proponent of social media in many cases, but I’ve never believed it to be a magic potion, and it’s certainly not for everyone. But how exactly is it ignored by one of Manhattan’s most successful agents?

A quick Google search on the benefits of social media returns roughly a bajillion results. Overall though, most agree that main deliverable, not the scalability, or the amplification, but the jewel at the end of the effort; the feature at the end of the benefit…. is conversation. The ability to connect with another person or persons and speak with them on a direct one-to-one level.

You see, that Corcoran Group agent with two phones to her ears doesn’t need the social mediums to amplify her efforts. She built her network the old fashioned way. She’s connected one-to-one with thousands of people.